Brooke Henderson survived a rollercoaster final round and birdied the last hole to win the Amundi Evian Championship by one shot at 17-under-par at Evian Resort Golf Club in France.

The 24-year-old from Smiths Falls, Ontario, entered the final round with a two-shot lead but struggled out of the gates, dropping a shot at her first hole and then making a four-putt double bogey on the sixth, to lose her outright lead.  Read more

The Canadian ended a wild final round at the Evian Championship by rolling in an 8-foot birdie putt at the 18th hole to win by 1 stroke on Sunday.

Henderson was soaked in champagne by fellow players on the 18th green after an even-par round of 71 that saw her finish 17-under 267 and ahead of Sophia Schubert, an LPGA rookie who was one of many to make a run at Henderson at Evian Resort Golf Club.  Read more

Brooke Henderson is a major champion for the second time in her young career.

The 24-year-old native of Smiths Falls, Ont., birdied the 18th hole to finish at 17-under and win the Evian Championship in Évian-les-Bains, France on Sunday.

The victory is Henderson's 12th LPGA victory and her first major since 2016 at the Women's PGA Championship.

Canadian Brooke Henderson won the Evian Championship, her second major title, on Sunday by one shot with a birdie on the final hole.

Henderson, 24, claimed her first title in the 2016 Women's PGA Championship.

She finished on 17-under despite a struggle on the final round, edging American Sophia Schubert.  Read more

Canadian Brooke Henderson returned to the winners’ circle in golf’s premier events after a gap of six years at the Amundi Evian Championship in France.

Henderson, whose major breakthrough came at the 2016 Women’s PGA Championship, holed a 10-foot birdie putt for a 17-under total on the last – where just moments earlier Sophia Schubert had missed from a similar distance to get to the same mark.  Read more

The Amundi Evian Championship certainly delivered on drama over the final day, as a stacked leaderboard of Major winners and Rookies battled it out for the fourth Major of the season.

Despite starting with a two shot lead going into Sunday, eventual winner, Brooke Henderson, saw her advantage evaporate in just two holes, as an early bogey was capitalised on by nearest challenger, So Yeon Ryu.  Read more 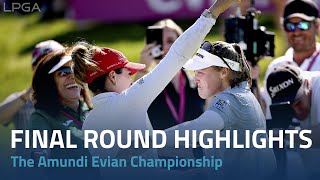