Down to the wire: Cam Smith & Jon Rahm tied, five ahead of the rest, heading into the final round

KAPALUA, Hawaii — Jon Rahm matched the low score of his career, tied the course record at Kapalua and played his last 12 holes in 11-under par for a 61. He needed it just to catch Cameron Smith in the Sentry Tournament of Champions on Saturday.

In an outrageously low-scoring start to the new year on the PGA TOUR, Rahm and Smith pulled away from the rest of the winners-only field by going shot-for-shot, putt-for-putt across so much of the back nine on the defenseless Plantation course.

Rahm capped off his birdie-eagle-birdie-birdie finish with putts from just inside 30 feet and 15 feet for his 12-under 61. That tied the course record set a few hours earlier by Justin Thomas... Read more

Justin Thomas broke the tournament record with a 12-under-par 61 in Saturday’s third round of the Sentry Tournament of Champions.

He stood there alone for about 90 minutes.

Playing in the last group, World No. 1 Jon Rahm made nine birdies and an eagle on his final 12 holes on the Plantation Course to also sign for a 61 and earn a share of the lead with Cameron Smith heading into the final round.  Read more

Rahm won the battle on Saturday as he closed with another birdie to post a course-record 12-under 61 and join Smith at the top of the board at 26-under for the week. But Smith (64) is not ready to surrender the war as both take a five-shot buffer over Daniel Berger (66) and sit six clear of FedExCup champion Patrick Cantlay (66), Australian Matt Jones (62) and South Korea’s Sungjae Im (65).

Smith knows Rahm will start the favorite on Sunday but he’s far from intimidated.  Read more

Smith remains on course for a wire-to-wire victory after refusing to blink as Rahm toyed with the Kapalua Plantation Course while compiling a course record-equalling 12-under 61 to catch the mulleted Australian at 26-under 193.

The pair turned on a third-round scoring clinic, with Smith's putter running hot as he carded a flawless nine-under 64, including six back-nine birdies.  Read more 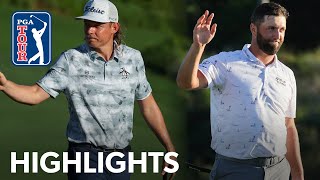