"Carrying On" ~ The Caddie School for Soldiers

"Carrying On" ~ The Caddie School for Soldiers (Trailer above)

"Carrying On" is an acclaimed documentary film that depicts the work of the Caddie School for Soldiers, a nonprofit veterans organization whose mission is to help ex-soldiers rise up from the desolation of the wars they fought, restore their essential belief in themselves, and see that a meaningful and positive future is possible after military service in whatever new field they may choose to pursue.

Filmed in St. Andrews, Scotland and directed by Jon Beer, the film premiered at the 2021 Ryder Cup Matches at Destination Kohler in Kohler, Wisconsin.

You can view the full film and learn more about the Caddie School for Soldiers at their website: https://www.caddieschoolforsoldiers.com 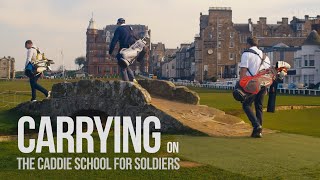