Guerrier opened up a two-shot lead and Veerman put on a show on the second day of the 2022 Cazoo Open supported by Gareth Bale.

France's Julien Guerrier set a target which could not be caught on Friday, posting his 68 in the morning to move to seven under par. He made five birdies and two bogeys as well as producing some spectacular par saves as the Twenty Ten Course at The Celtic Manor Resort provided a stern test once again...

Johannes Veerman had a day to remember on Friday, sinking an enormous putt on the first hole for a birdie before judging his tricky third shot to perfection at the ninth and rolling in the birdie putt. But he saved his best until last, holing out for an eagle on the 18th from the fairway.  Read more

France’s Julien Guerrier holds a two-shot lead at the halfway stage of the Cazoo Open supported by Gareth Bale at Celtic Manor.

Guerrier followed an opening-round 67 with a three-under 68 on Friday morning in Wales, carding five birdies and two bogeys to move to set a clubhouse target that couldn't be matched by the later starters.

The world No 381 holds a two-shot cushion over Callum Shinkwin and American Johannes Veerman, who both matched Guerrier's second-round 68, while a round-of-the-day 66 lifted Thomas Detry within three of the lead.  Read more

The 37-year-old added a second round of 68 to his opening 67 for a total of seven under par which left him two shots ahead of England's Callum Shinkwin and American Johannes Veerman at Celtic Manor.  Read more 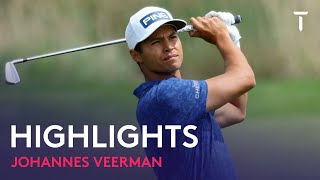