Celine Boutier is the 2021 Lacoste Ladies Open de France champion after securing victory in the most dramatic of fashions at Golf Club du Medoc.

The two-time Solheim Cup winner kept her nerve on a frantic final day in Bordeaux, before sinking a fantastic birdie putt on the last to take victory by a single shot ahead of Scotland’s Kylie Henry.

The two players were neck and neck for much of Saturday, with the lead exchanging hands throughout the day, before heading down the 18th tied on -10 apiece.  Read more

In her home country of France, Duke University women's golf graduate Celine Boutier won her second Ladies European Tour title on Saturday as she registered a 1-stroke victory at the 2021 Lacoste Ladies Open, which was played at the Golf Club du Medoc.

Coming off helping Europe win the Solheim Cup earlier this month, Boutier continued her stellar play by carding rounds of 68, 66 and 68 over three days to finish with an 11-under, 202.  She finished one stroke ahead of Kylie Henry (203).  Fellow Duke graduate Virginia Elena Carta also finished well with a sixth-place ledger with rounds of 67, 68 and 71 for a 6-under, 206.  Read more

From The Scotsman, by Martin Dempster:

Kylie Henry pushed Celine Boutier all the way to the end as the home player eventually prevailed in the Lacoste Ladies Open de France at Golf Club du Medoc.

Boutier, a member of the last two triumphant European Solheim Cup teams, birdied the last from 20 feet to pip Henry by a shot in the 54-hole title battle.  Read more 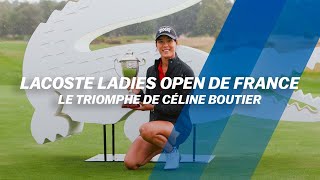