From WOSU.org, by Natasha Williams:

Trailblazing golf professional Charlie Sifford would have turned 100 years old Thursday. He overcame racism and prejudice to help pave the way for other African Americans to play on the PGA Tour. The Memorial Tournament honored Sifford this week posthumously for his significant contributions...

Charlie Sifford Sr. became the first black golfer to earn his PGA card in 1961. He navigated a lot more than sand traps and ponds on the course during those days. Taunts, racial slurs, segregation and even death threats were common. In many cases, he could not eat in dining halls and restaurants with fellow white golfers. He often ate his meals in the locker room where on some occasions, some white golfers joined him. Later in life, he wrote a book aptly named Just Let Me Play...

Sifford won twice on the PGA tour, and in 2004 he became the first black golfer admitted to the World Golf Hall of Fame. He received the Presidential Medal of Freedom in November 2014 from former U.S. President Barack Obama.  Read more

Then he paused, not for effect but to sigh, because to mention Charlie Sifford is to remember a painful time when whites wanted Blacks to show up at the course only to carry their clubs. Black caddies were OK. Black golfers? Especially Black professional golfers? No thanks.

“But Charlie Sifford is the one who probably had it hardest of them all,” Hammond continued. “He was one of the first to push and break down the barrier and walls, and he received backlash for it.”
...

It took Sifford winning two tour events, the 1967 Greater Hartford Open and 1969 Los Angeles Open, to finally gain a measure of respect among much of the golfing establishment. In 2004, the Brecksville, Ohio, resident became the first Black inducted into the World Golf Hall of Fame.

Tiger Woods, who named his son Charlie in honor of Sifford, in 2015 credited the pioneer with paving the way for his own career.

“I probably wouldn’t be here (without him),” Woods said. “My dad would never have picked up the game. Who knows if the (whites only) clause would still exist or not? But he broke it down.”  Read more 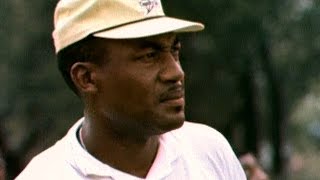