Collin Morikawa becomes "the first player in the history of the game to win two different majors on their first attempt".

Fellow Californian Collin Morikawa invoked thoughts of the two most successful Golden State-bred golfers who came before him as he became the first player to win two different majors in his debut at The 149th Open.

One is reluctant to tie the 24-year-old’s achievements to these legends, such is their enormity, but it is impossible not to watch the now five-time PGA TOUR winner and be amazed.   Read more

The American closed with a bogey-free, 4-under 66 and won The Open Championship in his debut Sunday, becoming the first player to capture two different majors on the first attempt.

His victory 11 months ago on his PGA Championship debut came in the first major with no spectators amid the pandemic.

So it was a very different scenario for Morikawa, a mature-beyond-his-years Californian, as he made one of the greatest walks in golf down the 18th fairway at Royal St. George's, first to applause and then to a standing ovation... Read more

Collin Morikawa  broke more than a string of records as he shot 66 to win The Open by two shots from Jordan Spieth to become the first player to win two different Majors on his debut.

The Californian (24) not only broke the heart of Spieth into smithereens, but he also left Louis Oosthuizen still searching for that elusive second Major win after producing one of the great Open Championship performances to win on 15-under par 265 at Royal St George’s.

He trailed Oosthuizen by just one stroke heading into the final round but in a performance that was a blessed relief from the bomb-and-gouge fare of late, he produced a tactical masterclass to claim a victory...  Read more

Collin Morikawa held off a charge from Jordan Spieth to win the 149th British Open by two shots after a scintillating Sunday's action at Royal St George's...

The American had never even played in links conditions until last week's Scottish Open when he tied for 71st, the worst finish of his professional career.

But the world number four showed no sign of inexperience as he revelled in the sweltering conditions as temperatures hit 30 degrees celsius... Read more

From Golf Australia:  GALLERY of the final round 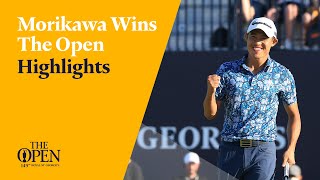