Darren Clarke is Senior Open Champion; 4th player ever to win both The Open and The Senior Open

Darren Clarke secured his first senior major title with a narrow victory in Scotland; Victory sees the Northern Irishman join Gary Player, Bob Charles and Tom Watson as only players to have won The Open and Senior Open in their careers.

Darren Clarke held off a late charge from former Ryder Cup captain Padraig Harrington to claim a one-shot victory after a weather-delayed final round at the Senior Open.

Clarke mixed two birdies with a lone bogey in tough conditions on the King's Course, seeing the Northern Irishman end on 10 under. Read more

Darren Clarke completed the ultimate double when he two-putted the 18th from more than 30 yards for birdie to pip a charging Pádraig Harrington by a shot for The Senior Open Championship at Gleneagles.

Eleven years after winning The Open at Royal St George’s, the burly Dungannon man (53) went into the final round tied for the lead with England’s Paul Broadhurst and closed with a one-under 69 to win by a shot from recently-crowned US Senior Open winner Harrington on 10-under par.  Read more

From the Belfast Telegraph, by Adam McKendry:

Darren Clarke admits he has fulfilled another of his golfing dreams after joining an illustrious and small group of players who have won both variations of the Claret Jug after triumphing at the Senior Open Championship at Gleneagles.

The Dungannon man, who won The Open at Royal St George’s in 2011, claimed a one-shot win over Padraig Harrington on the Kings Course to join Gary Player, Sir Bob Charles and Tom Watson as the only four players to win both the Open and Senior Open titles.

Clarke rounded things off with a monster two-putt for birdie on the par-five 18th to claim the victory at 10-under-par and admitted he is thrilled to join a group of golfing legends.  Read more 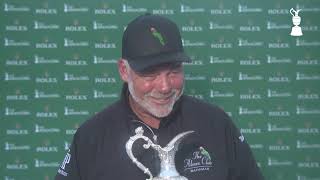