Dean Burmester claimed his first win in just over four years as a bogey free closing 62 handed him a dominant five shot victory at the 2021 Tenerife Open.

The South African entered the day at Golf Costa Adeje one off the lead but hit the front on the seventh and never looked back, moving to 25 under and holding off the challenge of Germany's Nicolai Von Dellingshausen, Pole Adrian Meronk and Finn Kalle Samooja.  Read more

There is winning, and then there is winning in style, with a bit of panache thrown in. This one had all of the above. Closing with a best-of-the-day nine-birdie, nine-par 62 that took him to 25 under for the week, Dean Burmester ultimately strolled to a five-shot victory at the €1.5 million Tenerife Open.  Read more

South Africa’s Dean Burmester turned on the magic on Sunday as he carded a stunning nine-under-par 62 to win the European Tour’s Tenerife Open on the Canary Islands by five strokes.

It was a majestic round of golf as he sailed his way to a nine-under-par 62, not dropping a shot while he pulverised drives off the tees, and showed deft touches around the greens. He matched it all with some superb putting, perhaps most significantly when he saved par on the ninth.  Read more

South African Dean Burmester has shot a brilliant bogey-free 62 to claim his first win in four years at the Tenerife Open...

Australia's 47-year-old Scott Hend enjoyed a final round 67 to finish in a tie for eighth in the European Tour event on 16-under par.  Read more 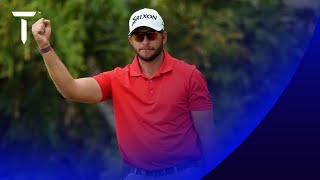