Antoine Rozner birdied five of his last six holes as he continued his love affair with the Fire Course to take a one shot lead into the weekend at the 2021 AVIV Dubai Championship.

The defending champion stayed bogey free through 36 holes with a 64 to get to 15 under and take his score over six rounds at this event to 40 under.

Overnight leader Joachim B. Hansen also stayed bogey free for the week with a 67 to sit a shot back alongside Italian Francesco Laporta, who matched Rozner with a 64.  Read more

Defending champion Antoine Rozner claimed a one-shot lead at the halfway stage of the Dubai Championship.

The Frenchman carded a bogey-free second round 64 to move to 15 under for the tournament as he continued his love affair with the Fire Course at Jumeirah Golf Estates where he won his inaugural title just under a year ago.  Read more

Defending champion Antoine Rozner vowed to maintain his aggressive approach after claiming a one-shot lead at the halfway stage of the AVIV Dubai Championship.

Rozner, who has not dropped a shot over the first two days, birdied six of his last eight holes to add a second round of 64 to his opening 65 and reach 15 under par, a shot ahead of JB Hansen and Francesco Laporta.

Finland’s Kalle Samooja is a shot further back, with the English pair of Tommy Fleetwood and Paul Waring three off the lead on 12 under.  Read more

Antoine was back on top, Francesco was getting rewarded and making friends in the process and the never ending quest for improvement went on for Pádraig on day two of the 2021 AVIV Dubai Championship.  Read more 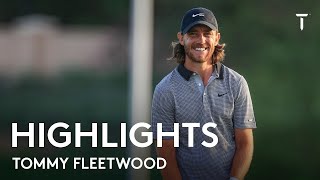