On Day One of the Dubai Desert Classic, 40 players shot 68 or better.

Defending champion Sergio Garcia, following his win at Singapore on the Asian Tour, shot three birdies in a row and ended the round on 67.

Rory McIlroy, with ten putts and no bogeys, ended with 65 for the day, seven under par.  Rory commented after the round:

"It was nice to get off to a good start that way and sort of put yourself right in contention in the tournament straight away.

"That's honestly one of my goals this year. I feel like I started off last year a little bit sort of 71, 70 instead of getting right into the thick of things from the start. So it's been nice to start the last couple of weeks like that."

26 year old Tyrell Hatton (Eng) had a brilliant start, making six birdies and an eagle, rounding off with 64.

David Horsey has won four events in the European Tour in earlier years.  His 63 took him to the top of the leaderboard.

Then, late in the day Jamie Donaldson from Wales appeared on the scene. After four birdies in a row, he ended with a 10-under-par 62,  "Just one shot short of Ernie Els 24 year course record" (ref European Tour site).

Tyrrell Hatton is fourth on 8 under, after Horsey and Anthony Wall (both on 63), while McIlroy and Thomas Pieters are among the five sharing fifth place on 7 under after 65s. 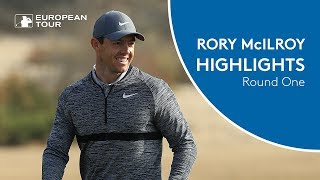