Thanks to firefighters for saving the club from the ongoing bushfires

A golf course operator says a “massive ball of flames” shot into the sky as a blaze tore through Mount Gambier’s heritage Crater Lakes precinct.

“We were extremely lucky, thanks to the Country Fire Service and Metropolitan Fire Service. Things could had been horrible,” said Blue Lake Golflinks operator Bill Burley.

He said back-burning along the edge of the course helped save the facility.

“Watching the fire bombers and helicopters, it was quite eerie,” Mr Burley said.

He witnessed the event first-hand and said at one stage he could hear the “crackling of the fire” while standing in the car park with smoke billowing just 100 metres away.

He praised the efforts of firefighters on the ground and in the air, given the significant aerial water-bombing efforts that helped contain the fire. 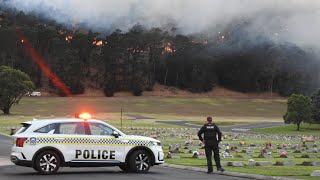