Rory, Tyrrell and Collin take on the One Yard Fairway, the Hero Challenge!

Ahead of the Abu Dhabi HSBC Championship, we took Rory McIlroy, Tyrrell Hatton and Collin Morikawa to the drag strip at Yas Marina Circuit for one of the most difficult challenges we’ve ever attempted – hit a one-yard-wide fairway.

What followed was an enthralling physical and psychological battle, as all three battled themselves, the elements, and the slimmest of targets. 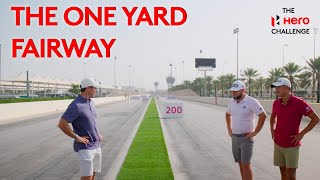