From the European Tour Report:

Garrick Higgo continued to write his own chapter in the European Tour history books as he powered to a second win in three weeks at the 2021 Canary Islands Championship.

Just 14 days after he lifted the trophy at the Gran Canaria Lopesan Open with a European Tour record low score of 255, a closing 64 with a hole-in-one moved him to 27 under and handed him a six shot victory at Golf Costa Adeje.

Australian Maverick Antcliff has enjoyed his best-ever result in a European Tour event, finishing runner-up in the Canary Islands Championship with a superb 21-under-par performance.

Alas for the man who hails from Beaudesert, the same Queensland town as Jason Day, his heroics at Golf Costa Adeje weren't enough to topple inspired runaway champ Garrick Higgo, who won by six shots and recorded his first career hole-in-one en route to Sunday's triumph.

Higgo, the 21-year-old left-hander from South Africa who also won the Gran Canaria Open, cruised to his second victory in three weeks, shooting a final round 64 with the help of an ace at the par-three seventh...  Read more 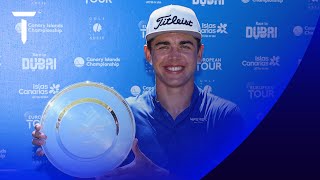