Background to This Year's Australian Amateur Golf Championships at Kooyonga

Kooyonga Golf Club will play host this week as both men’s and women’s crowns will be contested over 72-hole strokeplay events for the first time.

The stunningly prepared Adelaide course, host of many storied events in Australian tournament golf, was not the originally slated venue. But with the grand opening of its redesigned clubhouse last week for what was originally intended to be the now-cancelled Women’s Australian Open, club officials graciously took on board the national amateur championship in its stead.

Naturally, COVID-19 has played a big part in many of the changes, not least of which has been the constant and ongoing challenge of state border restrictions.   Read more here

There’s not much Grace Kim hasn’t done in her amateur career, but today she landed one of the last remaining big fish.

The 20-year-old from Avondale in Sydney added the Australian Amateur crown to the junior national title she won in 2017 when she blew the field away at Kooyonga.

That she started the final day two strokes adrift of Kirsten Rudgeley and finished it with essentially four putts from just behind the 18th green makes her seven-stroke margin even more remarkable.

Kim’s 68 - to finish three under in total - included a run of six birdies in eight holes from the ninth when the tournament was in the balance.       Full article here 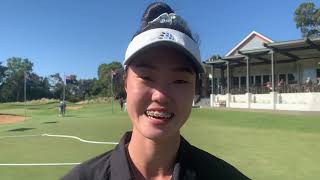