Growing calls for golf to be more sustainable

Growing calls for golf to be more sustainable

The impact of golf on the climate and environment has led to growing calls to make the sport more sustainable -- even to play on bone-dry courses, as golfing legend Tiger Woods has enjoyed.  And it's not just to save the planet, but to save the sport itself, as the climate crisis threatens to transform many courses into muddy swamps.
The president of the American Society of Golf Course Architects (ASGCA), Jason Straka, told CNN Sport how the climate crisis has been affecting golf in flood-threatened Florida, and in Ohio and Utah, which have been hit by warmer-than-usual weather and even drought.
------------
The situation in Australia is similar: Lynwood Country Club, northwest of Sydney, was flooded in 2020 and again earlier this year. At one stage, parts of the course were over 26 feet under water, while up the New South Wales coastline, Nambucca Heads received 42.5 inches of rainfall in just eight days.
On the same eastern coast, some 350 miles south of Sydney in the state of Victoria, Mallacoota Golf Club very nearly perished during the bushfires of 2019 and 2020, the fairways providing a sanctuary for townsfolk. Club Catalina, further up the NSW coast, broke the firewall that threatened to wipe out the town.
------------
At the COP26 summit in the Scottish city of Glasgow, the North Berwick-based environmentalist GEO Foundation for Sustainable Golf showed a virtual audience how golf is learning to be a champion among sporting bodies for a greener planet.  Read full article here 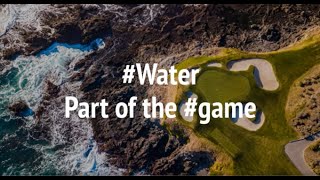