History of the Ryder Cup

Origins of the Ryder Cup

The biennial Ryder Cup sees 24 of the best professional golfers from Europe and the United States go head-to-head in a series of match play competitions. Heralded as one of the greatest sporting events in the world, it is a spectacle that transcends the sport of golf, yet its spirit remains rooted in the original seeds sowed almost 90 years ago.

Those seeds were in fact more literal than you might think. Samuel Ryder, a successful English seed merchant who had made his fortune selling penny seed packets, had taken up the game of golf at the spritely age of 50. Ryder fell in love with the game and paid professional golfer Abe Mitchell between £500-1,000 a year to be his personal coach.

In 1923 Ryder began sponsoring events, to not only support the professional golfers who were badly paid at the time, but also to promote his seed company, The Heath and Heather Seed Company.

Prior to this in 1921 the first unofficial match between professionals from Great Britain and the United States was played at Gleneagles in Scotland. Considered a warm up tournament before the Open Championship at St Andrews, it was the first time 12 golfers from either side of the Atlantic had gone head-to-head. The Brits claimed a 9-3 victory.

In 1926, the second unofficial game was played at Wentworth, Surrey. Enthralled by what he saw, Ryder wished to make the event a regular ‘official’ occurrence.  Read more 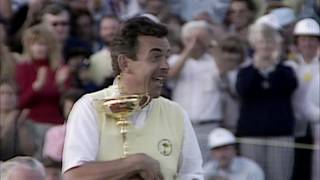