Thailand in the shadow of Covid as players begin first round:

Thailand has recently taken stronger measures to contain Covid 19. These are covered at The Straits Times here,  and earlier here,  at Nation Thailand, TAT News and Thailand AHK.  The 18 provinces in the "red zone" and subject to strict control include Chonburi (or Chon Buri), where the Siam CC and Pattaya Course are located. However this may have no significant effect on the golfers as their focus will be on the tournament itself.

The year 2019 feels like a lifetime ago for defending Honda LPGA Thailand winner Amy Yang. Though she doesn’t remember much from her spectacular performance two years ago, Yang revels in being able to call herself now a three-time champion this event...

Pushing through final round lightning and weather delays, Yang emerged victorious after a final-round 65, holding off Minjee Lee by one stroke and finishing -22 overall. It became the 14th occurrence of a player winning at least three times on the same course in the Tour’s history...

“I've been very fortunate to like win three times here. I would love to win another one."   ~ Amy Yang

World No. 7 Minjee Lee shot a bogey-free 6-under-par 66 in the final round of the Honda LPGA Thailand but finished one stroke shy behind winner Amy Yang. Lee had a solid performance throughout all four rounds of the tournament and put on a stunning performance for her fans. Happy about her round, Lee managed to close in on Yang’s three-stroke lead at the time the lightning delay occurred, while hitting 10 of 14 fairways and 15 of 18 greens.

Patty Tavatanakit returns to her home country in 2021 as a major-winning professional.

Now, the 21-year-old is in for a homecoming of sorts as she returns to the Honda LPGA Thailand for the first time as a full-fledged professional on the LPGA Tour and just a few months removed from her major victory at the ANA Inspiration. As an amateur, Tavatanakit finished T43 in 2015 and T42 in 2016 at Siam Country Club, but now her confidence has grown exponentially since her first appearances on the Pattaya Old Course.

How to Watch LPGA Thailand 2021 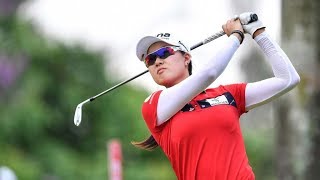