Jason Kokrak has won the 2021 Houston Open, 10-under par, two shots ahead of Kevin Tway and Scottie Scheffler. The top 15 names on the leaderboard are all from the US, except for Aussie Cameron Smith who snuck in at T15, 3-under par. Marc Leishman is a shot back, 2-under.

HOUSTON (AP) — Jason Kokrak had reason to believe he shot himself out of the Hewlett Packard Enterprise Houston Open on the back nine Saturday morning. He played it 10 shots better when it counted Sunday afternoon, making four straight birdies for a 5-under 65 and a two-shot victory.

Two shots behind with six holes to play, Kokrak delivered all the right shots to pull away from a fading Scottie Scheffler and Martin Trainer and win for the third time in the last 13 months.

A final-round 65 saw Kokrak finish on 10 under and register a third win in 13 months on the PGA Tour; Scottie Scheffler ended tied-second alongside Kevin Tway in Houston, with Kramer Hickok in fourth spot.

Jason Kokrak produced a late birdie run to secure a third PGA Tour title with a two-shot victory at the Hewlett Packard Enterprise Houston Open. Kokrak was three off the lead with six holes to play at Memorial Park Golf Course, only to post four consecutive birdies to close a five-under 65 and set a clubhouse target at 10 under that wasn't matched.  Read more 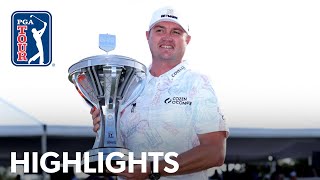