In case you missed it: Huge crab snaps golfer's club

From Golf Digest, by Alex Meyers:

In recent years, we've seen no shortage of terrifying wildlife on a golf course. Gators. Snakes. Bobcats. Bears. More gators. More snakes. You get the point, it's a dangerous world out there, even when you're just trying to get in 18 holes. What we didn't expect, however, is that a crab might be scarier than all these other animals.

That's right, a crab. Although, as you can imagine, the crab we're about to show you isn't exactly any crab. It's a robber or coconut crab, and according to Wikipedia, it's "the the largest terrestrial arthropod in the world, with a weight of up to 4.1 kg."

"Robber" is a fitting term because it wound up snapping one golfer's driver in the following, horrifying clip that was captured by a group of guys playing on Christmas Island...  Read more

Video above gives an idea of the size of these crabs.

Original footage of the golf club attack, on twitter 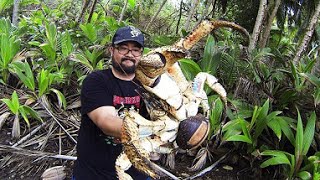