Jin Young Ko from South Korea has led the way in each round to take victory at this year's Women's Australian Open. On Sunday she carded 3-under-par to finish the tournament at 14-under. She is three strokes ahead of Hyejin Choi, also from South Korea, with Australia's Hannah Green just one stroke back.

Kathrine Kirk ended the final round on 7-under 65, the lowest for the day. She shot four birdies in a row, from the third hole, and finished fourth.

"It was a little bit unexpected but at the same time, I didn't make anything the first three days so I guess maybe I was due to make some today," Kirk said.

"I didn't expect to have a chance today ... the girls were playing well at the top."

Minjee Lee ended the tournament on 8-under, in a tie at 5th with Marina Alex (US). 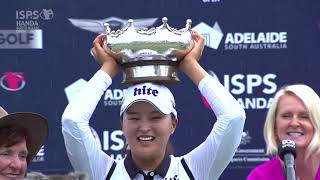