The John Deere Classic was launched 50 years ago, in 1971, then as the Quad Cities Open.  It became a PGA TOUR event the following year. John Deere began sponsorship of the tournament in 1999 and the TPC Deere Run became the host course in 2000.

In 2018 Michael Kim, also from the US, took out the title by a phenomenal 8 strokes, making 27-under-par.  Aussies Mark Hensby and John Senden have each won this tournament, in 2004 and 2006 respectively.

Defending champ for 2021 is South African Dylan Fritelli who won in 2019. In 2020 the tournament was cancelled due to Covid.

The Course, from Yahoo!Sports by Josh Culp:

TPC Deere Run is a par 71 that plays up to 7,268 yards when the PGA TOUR strolls through.

The Illinois native, D.A. Weibring, was the architect responsible for Deere Run and he wanted to bring an "old-time feel" to the layout despite it being constructed in the 1990s.

It is tree-lined but not tight. The landing areas are very generous so golfers hit most of their approaches from the short stuff during tournament week... Read more

The PGA Tour has arrived at TPC Deere Run for the 50th edition of what has become known as the John Deere Classic. Can Australia’s Cam Davis continue his winning form?  Read more

From the PGA TOUR:

The John Deere Classic celebrates its golden anniversary having withstood no fewer than five near-death moments, including at the tender age of 4, when an April 1975 news release announcing its demise was issued and then promptly rescinded.  Read more 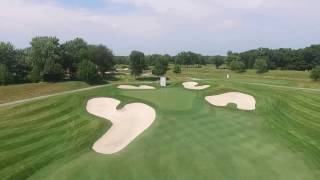