In April 2015 Jon Rahm became No 1 in World Amateur Golf Rankings. He held that place for a record breaking 60 weeks, with timeout after 25 weeks before reclaiming it.  In 2016 after the US Open he became a professional.

Now at 23 years old, in winning the 2018 CareerBuilder Challenge (based in La Quinta, California) he has overtaken Jordan Spieth to become the No. 2 golfer in World Golf Ranking. He is approximately 1.2 points short of Dustin Johnson at No. 1.

"It's hard to believe, to be honest, passing Jordan Spieth, three-time major champion," Rahm said.  "I only have two wins and he's got 10-plus, right? I never thought I was going to be at this point in my life right now."

Rahm won the playoff at the fourth hole against Andrew Landry. Here's what he said about Landry's game:

"To follow all the shots that I hit, I didn't miss one fairway, had a make-able birdie putt every single time, it's amazing that he kept up," Rahm said. "One of us had to do it, and either one of us would have been a well-deserving champion. Congrats to him, hard to explain what this means right now."

Next Rahm will play at Torrey Pines at the Farmers Insurance Open, 25th - 28th January. It was his win here last year with a 60 ft eagle putt on the final hole that launched him into World Golf Championship events.

The CareerBuilder Challenge began life as the Palm Springs Desert Classic, in 1960. The winner then was Arnold Palmer, who would win there five times.  No others have won more than twice. 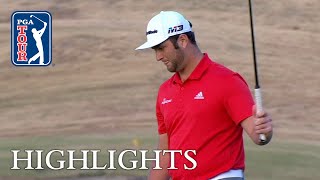