Karrie Webb has expressed concern about potential effects of LIV Golf for women golfers, and for Women's Golf generally.

World Golf Hall of Fame member Karrie Webb is one of the most decorated players in the history of women’s golf, and she’s worried about the where the game is headed.

In an appearance Wednesday on "Golf Today," Webb was asked about the turmoil taking place in the men’s game and whether she was concerned that the LPGA might endure the same.

“Yeah, I am,” Webb said. “In the women’s game it’s really hard because obviously you want as many women to have the opportunity to play the game, but as women I feel like we should be standing with all women. And the treatment of women in Saudi Arabia, we shouldn’t be supporting that.”
------------

Webb grew up idolizing fellow Aussie Norman, but after Norman brushed off Saudi Arabia's human-rights atrocities last month, Webb tweeted: "The little girl in me just died well and truly!!" When asked on "Golf Today" if she still felt that way, she responded: "She's still well and truly dead." 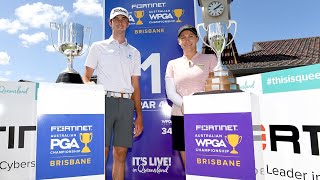