Brooks Koepka said "It was fun to come out and settle this" after he beat long-standing rival Bryson DeChambeau in charity exhibition event The Match.

DeChambeau, 28, failed to win a hole and conceded the match on the ninth after missing a birdie attempt.  Read more

From ESPN, by Mark Schlabach:

The match between Bryson DeChambeau and Brooks Koepka turned into a rout on Friday, as Koepka throttled his rival in a 4-and-3 victory in a 12-hole match at the Wynn Golf Club in Las Vegas.

Koepka, a four-time major winner, had four birdies in the match for charity, while DeChambeau didn't have any.  Read more

After both men claimed par on the fourth, Koepka extended his lead on the par-five fifth with his second birdie of the day, while DeChambeau let a mighty drive go to waste by hitting a tree with his second shot and failing to get up-and-down.  Read more

Brooks Koepka easily beat Bryson DeChambeau in "The Match," a 12-hole showdown, on Friday at the Wynn Golf Club in Las Vegas. Koepka rolled to a 4-and-3 win, winning holes No. 2, 5, 6 and 8 while DeChambeau didn’t win a single hole.

The event was the culmination of a back-and-forth past two years for the world top-10 golfers. Their public feud started back in 2019 when Koepka criticized DeChambeau’s pace of play.  Read more

Brooks Koepka trounced Bryson Dechambeau in “Capital One's The Match,” but did it settle everything between the two once and for all?

But the two appeared to earn each other's respect after Koepka put on a show at Las Vegas' Wynn Golf Club, recording four birdies en route to a 4-and-3 win in nine holes in which DeChambeau hit one of six fairways.   Read more 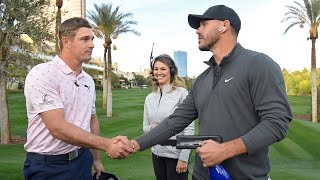