Lee Elder, who defied death threats to play at the Masters

Lee Elder defied death threats to play at the Masters

Lee Elder, who broke the color barrier at the Masters, died Sunday [28th November]. He was 87.

Elder won four times on the PGA Tour, but it was his fights against exclusivity that will be remembered far more than his play. He was a champion of racial justice and was a pioneer who shredded the ropes of segregation at Augusta National when he became the first Black golfer to participate in the Masters in 1975.  Read more

From Golf Digest, by Joel Beall:

Elder made 448 starts on the PGA Tour, winning four times. His victory at the 1974 Monsanto Open earned an invite to the 1975 Masters, where he became the first Black golfer to play in the tournament.

It was an achievement that brought out the worst of humanity, as Elder received death threats leading up to his appearance at Augusta National. The danger forced Elder to rent two houses during Masters week so that his would-be antagonizers would not know where he was.  Read more

Lee Elder, the first Black man to play in the Masters and an honorary starter at the 2021 Masters alongside Jack Nicklaus and Gary Player, died this week at the age of 87.

Elder was a four-time PGA Tour winner and teed it up for the first two rounds at Augusta National in 1975 in his historic debut. He went on to play in five more Masters and 34 major championships overall, where he put together seven top-25 finishes. His career was an inspiration. Despite enduring family trauma as a child -- his parents died before he turned 10 -- and abuse as a budding pro, he qualified for the PGA Tour via Q-School for the 1968 season.  Read more 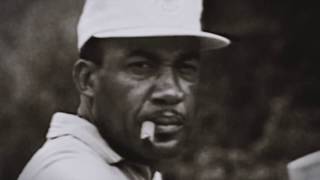