[Inbee] Park, who is four strokes back of leader Nelly Korda through two rounds, is one of 29 LPGA players in the field. Winners from the past two seasons are invited to the opener at Lake Nona Golf and Country Club. Among the 50 players in the celebrity division is Annika Sorenstam, the greatest player in the modern era who retired from the LPGA in 2008. Park and Sorenstam aren’t competing against each other. The celebrities vie for a purse of $500,000 and use a modified Stableford scoring format.
------------

Danielle Kang trails World No. 1 Nelly Korda by one stroke heading into the weekend at Lake Nona Golf and Country Club. The younger Korda sister paces the field at 10 under while Kang and 2020 TOC champ Gaby Lopez are at 9 under. Last year’s champion, Jessica Korda, sits two back.

Kang also played alongside country singer Lee Brice on Friday, a good friend who does not take his golf seriously. There was a point in the day when Kang told Brice she’d give him $100 if he could hit the green.

“He has really good humor about it,” said Kang. “He gave me his guitar pick and I started making putts, so I kept it.”  Read more 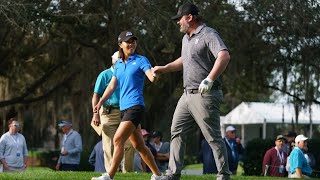