Round One of the 2018 LPGA Founders Cup begins on 15th March, teeing off from 7.00am. The LPGA Tour event is held at the Wildfire Golf Club in Phoenix, Arizona. It will be televised each day on Golf Channel. The field will include 12 of the world's top 20 women golfers, including Anna Nordqvist, Ariya Jutanugarn, Gee Chun, Christie Kerr and headlining, world No.4 Sung Hyun Park.

Sweden's Anna Nordqvist is the defending champion, having won here at the Wildfire Golf Club last year by two strokes with 25-under-par. Her game included a course record of 61 on moving day. Phoenix is familiar territory to her as she attended Arizona State University.

Michelle Wie will be competing. She won the HSBC Women's World Championship in Singapore earlier this month, in a game she wrapped up with a brilliant 36 foot birdie putt on the last hole. Wie's last few years have been hindered by injury and illness but in 2018 her fortunes seem to be changing.

Winner of the Women's British Open 2017, Kyung Kim, will be competing. In September, about six weeks after she won that event she was alone in her crashed car, off an isolated road in a remote part of El Dorado, Arkansas. When she regained consciousness she found her car was a write-off and she had no cell phone service. She had to crawl through the trashed car and climb out the window, before trying to find and flag down another vehicle. By some lucky chance the person who drove by and stopped was a volunteer worker at the tournament she was to attend, the Eldorado Shootout, so could pass on her circumstances to tournament personnel. Now, six months later, she hit an 8 foot hole-in-one to make it through to the Founders Cup as a competitor.

Two of the competitors are each the 'second sister' in the game. In the 68 years of the LPGA only once have two sisters won a Tour event. If Nelly Korda were to win, matching her sister Jessica, or if Moriya Jutanugarn were to match her sister Ariya, then they would become the second set of sisters to win. (Ref LPGA Founders Cup site for more information.)

A Bank of Hope Founders Cup Media Day was held this week at OdySea Aquarium in Scottsdale. Three of the tournament players, Ryann O'Toole, Alena Sharp and Giulia Molinaro, went into the water and swam with penguins, stingrays and sharks.  (Video above.) 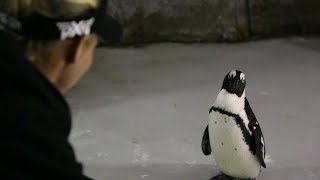