The Ladies have arrived in Evian, France, on the edge of Lake Geneva

Many of the world's best lady golfers have arrived in Evian, edging Lake Geneva. It has been a long journey for all of them. Some have made the five hour flight across Europe from Finland, where Matilda Castren triumphed on her home turf at the Gant Ladies Open. Some, including most Aussies, have made the longer flight of around nine hours from Michigan. Meanwhile for one Aussie, Stephanie Kyriacou, competing at Evian has meant travelling for 20+ hours. Stephanie recently won the Big Green Egg Open, while last year she won the Australian Ladies Classic Bonville by 8 strokes.

The other Australians competing at Evian are Sarah Kemp, Minjee Lee, Su Oh and Katherine Kirk.

The Amundi Evian Championship is special. Just ask Céline Boutier, one of five Frenchwomen in the major’s 126-player field.

“Playing mainly in America makes me miss home. I usually come back for Evian and the French Open, which are the only two weeks I get to compete in front of the French public,” said Boutier, who played the weekend in three of her previous four appearances at Evian Resort Golf Club. “The fact that the organization is always so great and glamorous in pink makes you dream of playing golf, especially when as a young girl. Even the posters are always so pretty.

“It’s a major that we have at home, which is something that not many people can experience.”  Read more

How to watch the Evian Championship 2021 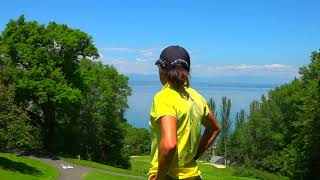