Lydia Ko turned 21 as the 2018 LPGA Mediheal Championship was getting underway. In 2015, at age 17 she was the number one ranked woman professional golfer in the world and the youngest golfer, male or female, to be ranked number one in professional golf. Through to 2016 she won 15 LPGA Tour titles, including two major championships. Since mid 2016 the New Zealander has been through a lull, without wins despite 44 starts.

Minjee Lee is also 21 and was ranked as the World Number 1 amateur women's golfer in 2014. She won the Oates Victorian Open on the ALPG Tour that year then in February 2018 the Australian again became the Victorian Open Women's Champion.

Both these young professional golfers have played and won at Lake Merced Golf Club prior to 2018. Ko was the champion of both the 2014 and 2015 Swinging Skirts LPGA Classic tournaments while Lee was the winner of the 2012 US Girls' Junior Golf Championship, also held at Lake Merced. Now, at the end of the 2018 LPGA Mediheal tournament, Lee and Ko faced a playoff for the championship.

At the start of the final day Ko had the lead. Then she bogeyed three of her first six holes. Her championship strength showed through as she did not allow those challenges to undermine her determination. She progressed steadily through the back nine and three of her last six holes were birdies. Ko and Lee were now tied on 12-under 276.

At the first playoff hole, the par-5 18th, Ko's three-wood second shot landed before the green and rolled on toward the pin. Lee hit her second shot into the rough near a bunker. She rescued this with a ten foot birdie putt.

Ko took her final shot from centre of the fairway, 230+ yards.  Her shot stopped just over two feet from hole and she tapped it in to win the day.

Ko glanced skywards briefly and there were tears on her face as she was hugged by her caddie.

"It's crazy because I was 3 over for the day at one stage, and I said, 'Hey, you've just got to focus, and you never know what's going to happen,'" Ko said. "I was able to kind of put my game together on the back nine. When that putt dropped, I was like, 'Oh, my God.  A lot of emotions, my whole team and my family have worked really hard for this moment.” 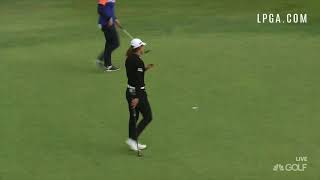