Mark Hubbard's Ace at Rocket Mortgage - after throwing down his club

At this year's Rocket Mortgage Classic, Mark Hubbard turfs his club in disgust...

From PGA TOUR, by Cameron Morfit:

DETROIT – Mark Hubbard had made a hole-in-one eight times heading into the first round of the Rocket Mortgage Classic. He knew what it felt like. Heck, his eighth ace came “after I had dropped about 100 beers” at Baker’s Bay in the Bahamas, so he thought he knew enough to cast quick judgement of his 216-yard tee shot at the 11th hole at Detroit Golf Club.

Disgusted with what felt like another right miss, Hubbard let go of the club with both hands on his follow-through, but when he looked up he saw that the ball had taken off neither too far right nor too far left. It was soaring directly at the pin.

“Dude, that better not go in,” said Wyndham Clark, one of his playing partners.

It did, of course, touching off a celebration that surprised no one more than Hubbard himself.

“I mean, honestly, it was pretty embarrassing,” he said after signing for a 4-under 68, four behind early leaders Tony Finau and Taylor Pendrith. “Didn't quite know where the ball was going today. Taking a week off and whatever I just didn't feel as spot on and I think I let go of the club on about three of the last four shots as well and they all ended up OK. I just felt really stuck and I thought it was going to be way right of the green.  Read more 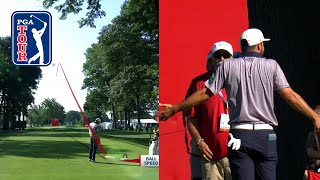