The Englishman entered the final round three shots off the lead but as many around him succumbed to the test of the 1997 Ryder Cup venue, Fitzpatrick made 15 straight pars to keep himself right in contention.

Birdies on the 16th and 17th then put him in total control and he finished at six under, three shots clear of Australian Min Woo Lee and Swede Sebastian Soderberg.  Read more

Matt Fitzpatrick secured a seventh European Tour title with a three-shot victory in a thrilling finish at the Estrella Damm N.A Andalucia Masters.

The Englishman overturned a three-stroke deficit on the final day at Valderrama, opening with 15 consecutive pars and birdieing two of his last three holes to post a bogey-free 69 and the week on six under.  Read more

Competing in his first event after finishing pointless at the Ryder Cup, Fitzpatrick carded a final round of 69, picking up shots on the 16th and 17th holes.  Read more 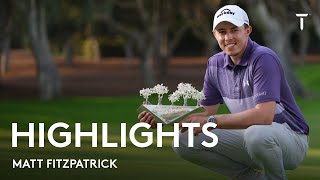