From PGA Australia, by David Tease:

It started with a blip, but Matthew Millar ensured regular service resumed with a scintillating second round to win the Queanbeyan Open.

Millar, already this summer the champion of the Murray Open, carded a blemish-free five-under-par 65 to add a “home-town” three-stroke victory to his rapidly expanding resume.

The 45-year-old Canberran, sleeping in his own bed and playing a course with which he’s extremely familiar, had double-bogeyed the opening hole on day one.

But he played the next 35 holes in 10-under par and without a bogey to again show his younger rivals a clean pair of spikes.  Read more

From Canberra Times, by James Buckley:

After a horror double bogey start to the two-round tournament on Thursday, the 45-year quickly recovered at the scenic NSW course which managed to survive the persistent threat of heavy rain.

"I just found a good groove there and made a couple of putts when I needed to," Millar said.  Read more

Canberra veteran Matthew Millar has claimed his second tournament victory of the summer, surging to a three-shot victory in the $50,000 Queanbeyan Open.

Playing a course he knows well, the 45-year-old proved too good for his younger rivals as he posted a five under par 65 closing round at Queanbeyan GC on Friday.

Having started the 36-hole tournament on Thursday with a double bogey, Millar played the remaining 35 holes in 10 under and without a bogey as he clinched the third event of the six-tournament NSW Regional Open Series.  Read more 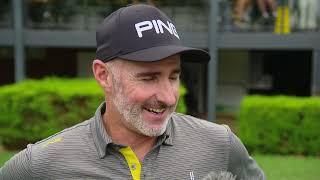