An entertaining write-up of Adam Scott's third round, by Bryce Miller in San Diego Union-Tribune:

The round former Masters champion Adam Scott carded Saturday during the Farmers Insurance Open screamed out for meds.  The highs and lows, manic and borderline berserk.  Momentum in either direction absorbed more punishment than the Washington Generals...

The start:  bogey, birdie, birdie, double bogey.  A four-hole flourish to cap the front nine caused the big black number on No. 4 to fade away:  birdie, birdie, par, eagle.  No other player carded two-under on No. 9 the entirety of the opening three rounds.

In spite of all those fairway fireworks — including bogeys on three of his final five holes — Scott found himself in a five-way knot for third at 8-under, two strokes off the lead and within striking distance of his 15th win on the PGA Tour.

The round flashed so many personalities that if it had a name, that name would be Sybil.

“I try not to have them like this, generally,” Scott said. “On tough tracks, stuff can go wrong.  And this is a tough track.” 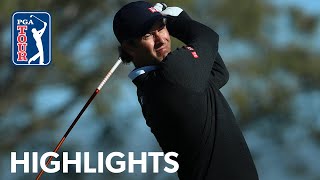