No longer constrained by the demands of Executive Office,  President Obama is wholeheartedly enjoying his golf rounds and working on improving his game.  He recently took lessons from Claude Harmon III.   Claude, who is speaking in the video above,  is coach of US Open Champion Brooks Koepka and has worked with many tour players including world number one Dustin Johnson.  Obama is a left handed golfer and Harmon advised him to turn his shoulders and aim further to the left.  Obama quipped that aiming more towards the left was something he had rarely been advised to do.

Obama's sense of humour showed through during the lessons with his readiness to laugh at flaws in his own game (when not expressing exasperation at the same).  During his two terms in office Obama played some 330 golf rounds.  Over that time his game has improved steadily, according to Claude.  In 2013 Obama had taken a lesson from legendary coach Butch Harmon, and Claude is now able to see specific improvements including greater speed in his swing, "no more weak cuts", and a more relaxed approach.  (Ref Tim Rosaforte, Golf Channel).

Last weekend, also, Obama played a round of golf with Tiger Woods and on Monday with Michael Jordan.  Woods is set for a Tour return, his first official PGA Tour event in a year, at Torrey Pines from Jan 25th - 28th.  Woods' game, as well as his revitalised presence at the Floridian for the round with Obama, drew strong, positive responses from those present, including from Obama and Claude Harmon.

In November 2016 Obama presented Michael Jordan with the Medal of Freedom.  The speech he gave at that time reveals a deep affinity and respect between them.  Back in 2014 however, Jordan derided Obama's golfing ability.  See video below.  We can only wait and see if MJ's opinion of the former President's golf skill has now changed. 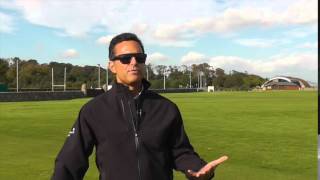