Ouch!! - Fan is slammed as ball bounces off him; Bubba makes near ace

From PGA TOUR:  In the opening round of the 2021 QBE Shootout, Bubba Watson bounces his 320-yard tee shot off a greenside fan, sending his ball a few feet from the cup at the par-4 13th hole. He would make the putt for eagle for he and his teammate, Lexi Thompson.  [Video above]

Watson signed his glove and gave that to the fan while teammate Lexi Thompson signed a golfball and gave him that as well.

From Golf Digest, by Ryan Herrington:

When tour pros are playing in the QBE Shootout, a two-person team event, if you’re not making birdies in bunches, you’re not going to have a chance. And if you can toss in an eagle every now and then, well even better.

That’s what Bubba Watson did on Friday during the opening round when paired with Lexi Thompson at Tiburon Golf Club in Naples, Fla., although it came with an unusual assist.   Read more

On the drivable 13th at Tiburon Golf Club, with partner Lexi Thompson in trouble off the tee, Bubba Watson attempted to drive the green. He absolutely nutted one, and air-mailed everything. However, instead of ending up several yards past the putting surface, the ball hit a spectator and ricocheted toward the stick.  Read more

Usually, getting belted by a golf ball isn't fun for anyone involved, but in this case, it was.

On Day 1 of the QBE Shootout on Friday, Bubba Watson bent it like Bubba on Tiburon Golf Club's par-4 13th, driving it right to the green. The ball would then ricochet off a fan's arm and fall just feet from a hole-in-one.  Read more 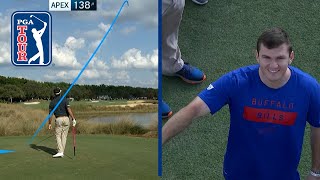