Patrick Cantlay wins the Memorial after playoff against Collin Morikawa

From PGA TOUR by Ben Everill:

There may have been more twists than a Hollywood blockbuster but ultimately Patrick Cantlay’s wild ride ended with a second Memorial Tournament presented by Nationwide win and the FedExCup lead.

Cantlay picked up his fourth PGA TOUR victory and second Memorial Tournament (2019) title in the last three seasons by outlasting Collin Morikawa in a playoff, draining a crucial par putt of 11-feet, nine-inches before his opponent failed to match from 6 feet.  Read more

From The Memorial Tournament Recap:

Patrick Cantlay delivered a clutch birdie late in the round and a 12-foot par putt in a playoff to win the Memorial on a Sunday filled with drama, a little rain, and no Jon Rahm.

Cantlay closed with a 1-under-par 71 and won the Memorial in Dublin, Ohio, for the second time in three years, and he said he felt the same range of emotions in the final hour at Muirfield Village in his duel with Collin Morikawa.

Fifty-four holes at the Memorial Tournament was seemingly too many, but then 72 was not quite enough. After Jon Rahm was running away with the tournament following Round 3, he had to withdraw following a positive COVID-19 test, which left Collin Morikawa and Patrick Cantlay tied for the lead after thinking they were six strokes down before the Rahm WD. They remained tied after Sunday's finale...  Read more 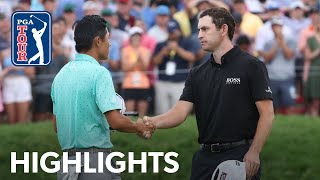