From LPGA, by LPGA Communications:

The Pelican Women’s Championship presented by Konica Minolta and Raymond James marks the 13th time in 18 stroke-play events this season that Leona Maguire has opened with an under-par round. Her bogey-free, 8-under 62 performance on Thursday at Pelican Golf Club in Belleair, Fla., was the second-lowest score of her career, bested only by the 10-under 61 in the final round of the 2021 Amundi Evian Championship, and set the tournament scoring record.  Read more

On Thursday at the Pelican LPGA Championship, Maguire put together another special performance, recording a tournament and course record 8 under 62 at Pelican Golf Club. There wasn’t a bogey in the group of 2020 Pelican champ Sei Young Kim (64), Lexi Thompson (65), and Maguire.

Maguire’s swing coach, Shane O’Grady, who has guided her since she was 10 ½, watched her compete in person at the Pelican for the first time since the penultimate Symetra Tour event in 2019, when Maguire earned her card.  Read more

Leona Maguire looks ready to clinch her maiden LPGA Tour win after firing with bogey-free, eight-under 62 to leave a star-studded field in her wake at the Pelican Women’s Championship in Florida.

The Cavan star (26) birdied all four par-threes, hit every fairway and took just 24 putts, curling in a closing seven-footer for the second-lowest round of her career.

LEONA MAGUIRE HAS powered into the clubhouse lead at the LPGA Pelican Women’s Championship, having carded a tournament and course record on day one in Bellaire, Florida.

Looking to finish her stellar season with a win, the Cavan native was cool, calm and collected as she clocked a sizzling opening round 62.  Read more 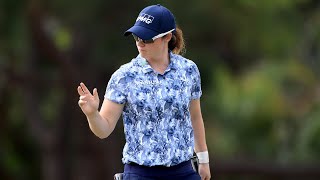