In the video above, Kira K. Dixon speaks with J.T. Poston, Will Zalatoris, Kevin Kisner and Billy Horschel to get their thoughts on the antitrust lawsuit LIV Golf players are filing against the PGA Tour.  - Golf Channel

"The money that is used to fight these lawsuits will be coming out of our pockets, the guys who have stuck with the TOUR, a Tour that has done so much good for so many players.  A lot of those guys who have built a name for themselves? It's coming from playing the PGA TOUR."  - JT Poston

"They made the choice to go over there, they're playing a direct competing Tour, and they want to come back here and play. I know their argument is they're independent contractors, but what they're doing over there is detrimental to our TOUR. You can't have it both ways."  - Will Zalatoris

"We're over here, we've been grinding all year, we've been doing everything to make our TOUR better, and be the best we possibly can be, and they're doing something detrimental."  - Will Zalatoris

"Obviously they didn't like something about our TOUR, so they went to a different Tour, and now they're trying to fight to come back to our TOUR. It doesn't make a whole lot of sense to me."  - Kevin Kisner

"Why?  Why do they need to come play the PGA TOUR?  They've made a decision to go play the LIV Tour. They made a decision to not follow the rules of the PGA TOUR.  They've signed multi-million dollar contracts. They're playing for a lot of money.  Every one of them has said that they want to play less golf, so now they're going to play more golf by playing on the PGA TOUR.  They've said they want to spend more time with their families. It just doesn't make sense to me."  - Billy Horschel

On Wednesday afternoon, the Wall Street Journal reported that 11 LIV Golf Series members, including Phil Mickelson and Bryson DeChambeau, have filed lawsuits against the PGA Tour in response to suspensions they received after making the move to the Saudi-backed circuit.

“We have been preparing to protect our membership and contest this latest attempt to disrupt our Tour, and you should be confident in the legal merits of our position,” Monahan said in the statement.

“Fundamentally, these suspended players — who are now Saudi Golf League employees — have walked away from the Tour and now want back in.”  Full Memo and more 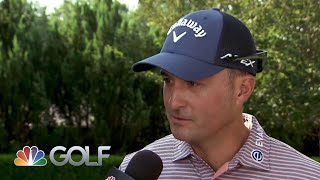