Sydney Golf Professional Andrew Evans has won the 2021 Isuzu Queensland Open on 18-under par, two strokes ahead of Bryden Macpherson, Deyen Lawson and Blake Windred on 16-under.  Defending champ Anthony Quayle is a stroke back again in a tie with Dale Williamson and Shae Wools-Cobb on 15-under.

From Jim Tucker at PGA Australia:

Evans drilled a wonderful five iron close to the pin from 180m at the par four 16th to grab his seventh birdie of a tense final day at Pelican Waters Golf Club outside Caloundra.

That was the clutch shot that gave Evans (68-70-65-67) some breathing room at 18-under-par and had mates at Sydney’s Bonnie Doon Golf Club rejoicing...

He showed his nerve leading for the entire back nine to finish ahead of three players in joint second, Gold Coast-based Deyen Lawson, Newcastle’s Blake Windred and Melbourne’s Bryden Macpherson, who finished with three straight birdies.

Evans, 35, forever banished the bridesmaid tag and worse which he has lived with since finishing second to Peter Senior at the 2015 Australian Masters at Huntingdale.  Read more here 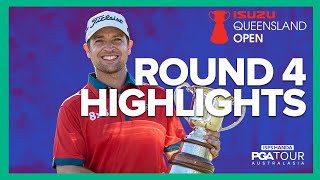