Local hope Chris Wood fired a fine 65 to lead the hungry posse of challengers set to make Sunday a thrilling shootout for the Isuzu Queensland Open.

The Wynnum Golf Club member sunk a nerveless 2m par putt on the final green at Pelican Waters in Saturday’s third round to lock in a one-stroke lead.

There are 18 players within five strokes of the lead as the storied tournament heads to a climax overflowing with birdies and tests of temperament.

Wood (68-68-65) has already reached the 15-under-par mark that Anthony Quayle posted to win last year’s event on the same course outside Caloundra.

Quayle, still an outside chance to defend at 10-under, looks a good judge. Pre-tournament, he tipped 20-under as this week’s winning score and it has been endorsed by Sydney’s Andrew Evans.

Evans (68-70-65) was the hottest player on course for 90 minutes with a streak of five straight birdies when he was rolling in putt after putt. Read More Here 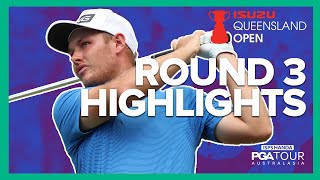