From Jim Tucker of Golf Australia:

It was a remarkable show of focus from the Bendigo pro who would have been excused if he had a letdown round after waiting so long for his breakthrough tournament success.

Instead, he carried the stellar form of his closing 61 to win The Players Series Sydney into a fine five-under-par 67 for the joint lead at Pelican Waters Golf Club. 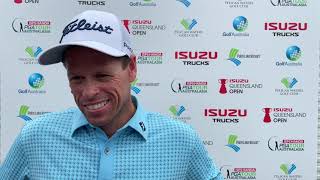