Now, in the second round of the Queensland Open, he is in a tie for the lead with 8-under par.

From Jim Tucker at Golf Australia:

Bryden Macpherson’s hot 64 has thrown him into a potential weekend shootout with touring housemate Chris Wood for the Isuzu Queensland Open title.

Macpherson grabbed two eagles on par fives to bankroll his eight-under-par round on a hectic Friday at Pelican Waters Golf Club outside Caloundra.

Some players in the field were trying to clear 27 holes in the day to make up for the big rain interruption when the course was hit by a wild squall on Thursday.

Victorian Macpherson’s 72-64 start has got him to eight-under-par which was matched by Queenslander Wood (68-68).  Full article here 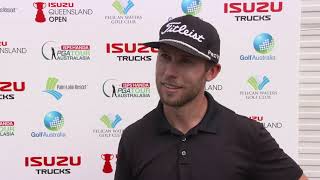