The Open is set to make a triumphant return to Royal Portrush in 2025, marking an exciting new chapter in the history of golf’s original Championship and providing another outstanding showcase for golf in Northern Ireland.

Following the success of The 148th Open at Royal Portrush in 2019, the First Minister for Northern Ireland Paul Givan MLA, Junior Minister Declan Kearney and Economy Minister Gordon Lyons joined Martin Slumbers, Chief Executive of The R&A, and Dr Ian Kerr, Captain of Royal Portrush Golf Club, at the renowned links on the Antrim coast today to announce that the Championship will be played there from 13 – 20 July 2025.  Read more

From Golf Digest, by Brendan Porath:

The refrain coming out of Royal Portrush in July 2019 was that the venue in Northern Ireland surely would not have to wait another 68 years to host another Open Championship. That common perception became official on Wednesday morning, when the R&A announced that the 2025 Open Championship will take place at Portrush. The rapid six-year gap is nothing like the wait from 1951 to 2019 and a further endorsement of the triumph of that staging two years ago.  Read more

From the Belfast Telegraph:

Shane Lowry, winner of the 2019 Open at Royal Portrush, has expressed his delight that the event will be returning to the Northern Irish links in 2025.

As well as having a popular winner in Irishman Lowry, the tournament two years ago attracted a crowd of 237,750 throughout the week – a record for an Open outside of St Andrews.

Lowry, who is playing in the BMW PGA Championships at Wentworth this week, was among players welcoming the Open’s return to the scene of his famous victory.  Read more 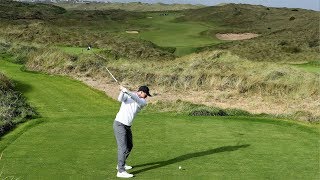