Yesterday Rafa Cabrera Bello said, "I'm going to have a very good chance at it tomorrow."

He was right, and he did it!

From the European Tour News Report:

Rafa Cabrera Bello defeated fellow Spaniard Adri Arnaus in a play-off to end his four year wait for a European Tour victory and complete the set of Spanish national championships at the 2021 Acciona Open de España presented by Madrid.

The 2016 Ryder Cup star entered the final day with a two shot lead but had lost it by the second tee and was two behind Arnaus at the turn after a battling front nine.

A hat-trick of birdies from the 13th had him back in a share of the lead at 19 under and he produced a stunning up-and-down from the sand on the last after a ragged tee shot to save his par and take the contest to extra holes after a 69.  Read more

Home hero Rafa Cabrera Bello set his sights on once again challenging for golf's biggest titles after claiming his first win in four years at the Acciona Open de Espana.

The Spaniard defeated countryman Adri Arnaus on the first play-off hole in Madrid to lift the trophy and complete a remarkable return to form after claiming just one worldwide top 10 in 2021.  Read more 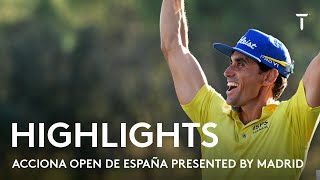