Rory McIlroy says the environmental "guilt" he feels for traversing the golfing globe in private jets has caused him to spend tens of thousands of pounds to offset his carbon footprint. The four times major champion was speaking after travelling from his Florida home for this week's DP World Tour Championship in Dubai.

When asked by BBC Sport whether sustainability is something that bothers him, McIlroy said that the issue first came into his conscience after winning in Shanghai two years ago.  Read more

From the Herald Scotland, by Nick Rodger:

WHEN you’re a globetrotting golfer, the amount of time spent flying hither and yon in a plane just about leaves you with the kind of vast carbon footprint that tends to be the reserve of a coal-fired power plant in China.

Step forward, then, Rory McIlroy. “I wouldn't self-profess to be an eco-warrior, but I'm someone that doesn't want to damage the environment,” confessed the Northern Irishman, who has touched down in Dubai for this week’s DP World Tour Championship.  Read more

From the Irish Examiner, by Phil Casey:

In the wake of the recent UN Climate Change Conference (COP26) in Glasgow, McIlroy was asked for his views about the frequent flights he takes to compete in a sport which is, in itself, not considered environmentally friendly.

"Two years ago, after I won in China, I flew back home privately and it was just me on the plane," McIlroy said after making the trip from his home in Florida to Dubai for the DP World Tour Championship. "And I just got this massive sense of guilt come over me..."  Read more

DUBAI, U.A.E. — It should come as no surprise to anyone to hear that Rory McIlroy—a proud Irishman born and bred—is predisposed to all things green. But, as ever with the four-time major champion, there is more to that aspect in his character than casual preference. One of the most thoughtful members of golf’s elite, the Belfast boy has always been mature beyond his years. Asked about the size of the global footprint someone with his jet-set lifestyle can potentially leave in his wake, McIlroy revealed that he is almost 24 months into positively alleviating that issue.  Read more 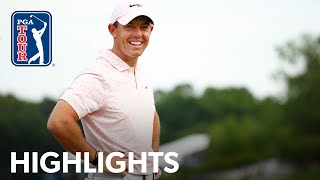