The RSM Classic is the final PGA TOUR event of the year, bringing the fall schedule to a close in the idyllic seaside setting of Sea Island Resort in St. Simons Island, Georgia.

Robert Streb returns to defend last year’s win, the second of his career and second at Sea Island. He’ll have to fend off a top-notch field to collect The RSM hat trick, including plenty of Sea Island residents who are full of local knowledge and hungry to win in front of a home crowd.

LAST TIME: Robert Streb won his second PGA TOUR title, six years after he claimed his maiden TOUR victory at Sea Island. Streb took down Kevin Kisner on the second hole of their sudden-death playoff after Streb knocked a wedge to within inches. Streb held the 36- and 54-hole leads and shot a solid 2-under 68 on Sunday. Kisner zipped up the leaderboard with a 7-under 63 – he erased a five-shot deficit by notching five birdies in his first 10 holes Sunday – to finish tied with Streb at 19 under. The breakthrough victory came after nearly a half-decade of struggles for Streb.  Read full Preview here 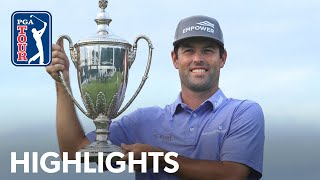