From the Daily Wrap-up, by A.P:

Eight times this season, Sam Burns has been atop the leaderboard after every round except the one that mattered. That changed, finally, at the Valspar Championship.

Burns got some help from Keegan Bradley hitting into the water on the 13th hole, and then the 24-year-old from Louisiana took it from there with two big birdies that led to a 3-under 68 and a three-shot victory Sunday.

Burns won for the first time on the PGA TOUR after twice failing to convert 54-hole leads in the Vivint Houston Open last fall and the Genesis Invitational at Riviera in February.

The victory moves him into the top 50 in the world, 14th in the FedExCup and all but assures a spot in the U.S. Open, along with his first trip to the Masters next spring...  Read more 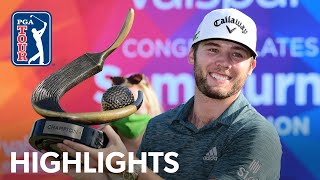