Among the intriguing "things to know" revealed by McCabe is this gem:

Hubert Green was leading the 1977 U.S. Open at Southern Hills by one stroke with four holes remaining when he pulled his tee shot left of the 15th fairway. He tried his best to keep his distance from his caddie, Shayne Grier. The caddie knew why.

Told of a death threat on his life called into the Oklahoma City FBI – an anonymous woman said gunmen would shoot Green at the 15th hole – Green had been given options by USGA President Sandy Tatum and police officers. Green said there was only one option. He’d play on.

In an interview with the Boston Globe in 2007, Grier said Green was keeping his distance so if there was a shooting, the player would be the only target. The gregarious Grier, still a volunteer official with Mass Golf, said he caught up with Green on the 15th and said, “Let’s give them two targets to shoot at.”

The levity might have helped. Green recovered from the left rough and made par at 15, then birdied 16 to increase his lead to two. He negotiated a par at 17 and could afford the safe bogey at 18 to win by one over Lou Graham.  Read more 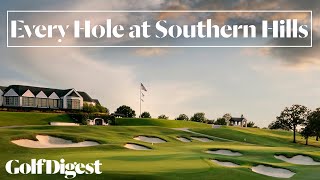