24 year old Sung Hyun Park from South Korea joined the LPGA Tour last year. She then won the US Women's Open and in November she became the number one ranked golfer in the Women's World Golf Rankings. Park is the winner of this year's VOA LPGA Texas Classic by one stroke, with 11-under par 131. American Lindy Duncan is runner up on 10-under 132 then China's Yu Liu on 9-under 133. Ariya Jutanugarn from Thailand is joint fourth with Sei Young Kim from South Korea, both on 8-under.

Park had been under some strain during these last few months. She had received both LPGA Player of the Year and shared Rookie of the Year awards in 2017, but twice since then she missed the cut and only once did she make the top ten, out of seven tournaments. Now, that stress has eased.

“Since I did so well last year, I felt a lot more pressure this year,” admitted Park in the media center after winning at Old American Golf Club.  “After this win, I feel like I can finish out the season with a lot less pressure.”

Her main challenge had been with her short game, where her world putting ranking sank to 99.  In the time leading up to the Texas Classic she put all her attention to overcoming this problem. She changed her stance, changed putters, and took time off to practice intensively. For tee shots through the tournament she swapped her driver for a three-wood.

“I’m usually a player that practices my driver shots, but last week I worked on my chipping and my short game a lot,” said Park.

Storms hit Dallas on Thursday and Friday, with torrential downpours. The tournament schedule had to be cut back to 36 holes.  The weekend weather however was brilliant, and many golf fans turned out to enjoy the event.

This is Park's third PGA Tour title. Her first round 65 was followed by 66 on Sunday, and included five birdies and an eagle, countering two bogeys.  She chipped in for birdie on the par-4 18th from behind the green, ending her round and securing her victory with a 5-under 66.

"The beginning of the season was pretty frustrating, since I missed two cuts, and I felt pretty upset inside," Park said. "But after today's win, I just feel like everything — everything just kind of disappeared." 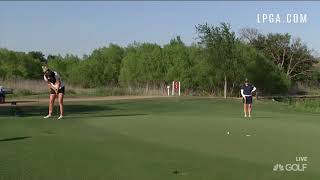